It would be absurd for me to discuss what Diana as Wonder Woman and I have in common without sharing what differences I found. There were quite a few actually. 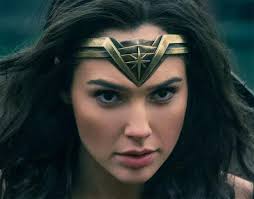 An obvious difference is that Wonder Woman was 5’10” tall and could defeat an entire army garrison in 4-inch platform boots!  I, on the other hand, am 5’4” tall and shrinking! Plus, I can barely walk up several flights of stairs in my arch support tennis shoes without seeking extra oxygen!

Diana figured out how to fly and torpedo herself as a weapon! The only way I can fly is to pay outrageous airline prices, stand in human-cattle lines for hours, and then sit very still in a cramped space between two strangers for 3-4 hours in a giant torpedo shaped can! My weapon of choice is a good dose of Dramamine!

Some other differences include: Diana can rock both a ball gown and a super hero wardrobe. My best look is jeans and an oversized t-shirt! She wields a sword pretty well and can lasso anything she wants. I can wield a mean skillet on a gas stove and there isn’t a jar I can’t open, with a little help from the rubber gripper I keep handy at all times!

There are, of course, many other differences because Wonder Woman is a fabrication of someone’s imagination and there isn’t a real woman anywhere who could begin to match her. That’s the whole idea of a super hero. I’m okay with that and I enjoy her story nonetheless.

There are two important differences though that I want to keep in my heart and mind. One to challenge me and the other to keep me focused on the real world full of it’s real people and our desperate need of a Savior!!

The differences between Wonder Woman and Me

Hippolyta: You will train her harder than any Amazon before her. Five times harder, 10 times harder — until she is better than even you.

The Queen of the Amazons, Diana’s mother, gave the order for Diana to be trained and trained and trained some more. But that order could only be carried out if Diana was willing to endure the five and ten times harder part of that training. To say that her early training was stepped up, is the bona fide understatement of DC Comic lore. And yet Diana met that training head on until she was the best and no one could beat her; not even the god of war.

Because of Diana’s willingness and even eagerness to train and train harder, she was able to tap into her deepest power and abilities and accept a seemingly impossible mission her mother reluctantly assigned. The only reason Diana could use the “god killer” sword and the lasso of truth and handle a shield for deflecting machine gun shots, is because she trained like her life and the very existence of the world depended on it.

A life of ease didn’t shape Diana, though her mother at first tried to provide that. A life of gladiator training with hand to hand combat smattered with blows to the head and topples to the ground prepared her for super hero status. Lounging around in the castle eating bonbons all day had no place in Diana’s daily experience. Active preparation and a willingness to be trained primed her for the day she pulled a man from the ocean waters. Nothing would be the same for Diana.

Elaine: I don’t have time for training. I have a family, a career, a life to pursue. I’ll fit in church when I can and read the training manual (Bible) sometimes. It’s not my fault I don’t experience the full blessing of God. 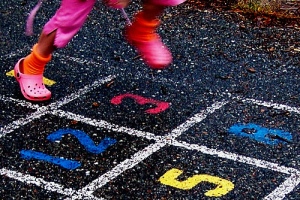 Sadly, I cannot with any honest confession, say that I train as one of Jesus’ disciples…as a daughter of the King of Kings…even two times harder let alone five or ten times harder than an average person might do. So in this comparison, I am not like Diana at all!

My spiritual muscles are weak and out of shape. Oh I can get by for a simple hike through church life and family interactions. But I am in no way, shape or form ready for the front lines of the ugly, filthy, and even hateful human messes that are the daily experience of all of us…and mostly from me, myself and I.

Some days, I cannot believe the ugly sinful thoughts that come to my mind and weave through my psyche and then express themselves in curt words or snide glances. One simple WalMart run proves my lack of training! But I shouldn’t be surprised. One church service and a few verses a week are no match for my old nature colliding with a world without Jesus!!

Unlike Diana who became better than her instructor, I will never be better than Jesus! I don’t want to be! He is God! I am Not! And it is much better that way! But, I am commanded to be like Him and the only way to do that is to train 5 times and 10 times harder in God’s Word, by God’s preachers and teachers, with God’s people in the trenches and Jesus as my instructor.

I have not “redeemed the time” or “taken the whole armor of God” with any kind of regularity. But I do want to finish my course well. I want to be a warrior princess for the God who saved me!! May God help me do so!!

“I have fought a good fight, I have finished my course, I have kept the faith:” II Timothy 4:7

Diana: “It’s not about what you deserve. It’s what you believe. And I believe in them (people). “Only love can truly save the world.” 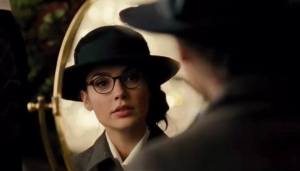 This is the biggest and most important difference between Wonder Woman and me.

Her premise sounds so good, so right, so doable. It is echoed all around us: movies, TV shows, marketing, sports figures, politicians and religion. But is it true? And does it solve the human condition; namely sin and separation from Jehovah God and eternal life?

First of all, it is ALL about what I deserve.

I deserve death and damnation because ALL have sinned.

Romans 3:10 “as it is written, There is none righteous, not even one.”

Romans 3:23 “For all have sinned and fall short of the glory of God.”

In a world where truth is relative, faith is pointless!

James 2:18-19 “But someone may well say, ‘You have faith and I have works; show me your faith without the works, and I will show you my faith by my works. You believe that God is one. You do well; the demons also believe, and shudder.” (emphasis mine)

Third, It is ALL about who you believe in!

Is it a little “g” god or The God, Creator, Lord of Lords and King of Kings? Or as, Diana claimed, should we believe in people?

How about the “Self” who cheats on their taxes and their spouse? Same difference, right? Or let’s believe in the “Self” who imposes lots of laws but excuses themselves of basic moral law? There is the “Self” who gives up after one or two tries or won’t hold down a job or abandons their kids? I could believe in that “Self”?

There is NOTHING in any human being; not my husband, not my kids, not even my grandkids that is worthy of my belief! And there is absolutely NOTHING in me that persuades me to believe in me! We are ALL too fickle!

No way, am I going to believe in people for my hope and salvation! The human race is a mess and has been since Adam and Eve. And quite frankly, man has been trying to save himself for ten millennia and isn’t doing a very good job. The evil and chaos and self-destruction of our enlightened age is powerful evidence against believing in people.

Little “g” gods like Diana and Thor, et al, are fun to watch in clever movie plots, but they do nothing for my reality or for yours! But neither does the god of the American Dream or peace at any cost. Just a cursory investigation into the rise of crime, violence, hate and suicide tells us that belief in our modern manmade gods leads to death and destruction, not the peace and life we all long for.

Jehovah is the God I believe, the Hope I cling to and the Life I long for!!! It is nothing of myself and everything of Him! For that truth I am eternally thankful!

Finally, there is only ONE love that CAN Actually Save the World!

John 3:16“For God so loved the world that He gave is one and only Son, that whoever believes in Him should not perish but have everlasting life.”

Romans 8:38-39 “For I am convinced that neither death, not life, nor angels, not principalities, nor things present, nor things to come, nor powers, nor height, nor depth, nor any other created thing, will be able to separate us from the love of God, which is in Christ Jesus our Lord.”